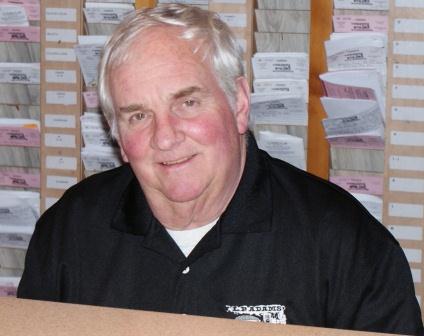 Possibly the oldest continuing retail business in the town of Dalton, L.P. Adams Co., Inc. is a family owned and operated business with members of the seventh generation working there today.

Founded in 1900 as Griswold and Adams, L.P. Adams Co., Inc. has a long history of service to the community. But the company actually got its start several generations earlier. During the 1850s, an uncle, William H. Hawley, started a coal and feed business in Dalton. In 1884, Hawley sold the company to Thomas W. Ransbotham, who built it into one of the largest businesses in Western Massachusetts at the time.

In 1890, Ransbotham bought the old Congregational Church building located on East Main Street in Dalton and moved it to Housatonic Street where it was converted into a dwelling and a feed and grain store.

On October 30, 1907, the renovated church building that housed L.P. Adams Co., Inc. was destroyed by fire. A new facility was built at the same location and is still in use today.

L.P. Adams Co., Inc. became well known throughout the area for rendering "prompt and capable service in everything pertaining to grain, flour, feeds, poultry supplies, coal, coke, and mason supplies." Coal and grain, such as Quaker dairy feeds and Ful-O-Pep poultry feeds, were delivered by rail car to the back of the large building and stored upstairs. Cordwood was cut on company property in Middlefield at the site of an old stone quarry, loaded on flat cars and railed to the Dalton location on the Boston and Albany Railroad. The wood was stacked in front of the store and split to order with a vertical, mechanical splitter. That same splitter, rebuilt, may now be seen in the main lobby of the store.

Upon his death in 1942, Leroy's son Henry Adams took over the family business. Leroy's grandson Harry A. Walton worked in the business as a schoolboy and after returning from service in World War II. In the mid 1950's Henry retired, putting Harry in charge of L.P. Adams Co., Inc.

Harry expanded the business with his father, Harry "Pappy" Walton. It was Pappy's responsibility to drive around in his old Ford pickup truck every Friday night picking up accounts receivable. On at least one occasion, one of Pappy's chickens made part of the rounds on the running board.

Under Harry's direction, the business grew with the help of his devoted wife Muriel, their three sons, Craig, Wayne, and Lee, along with family and friends. Upon Wayne's return from service in Vietnam, he joined his family in the ever-growing business.

Times change and L.P. Adams Co., Inc. has evolved with the times. The coal and grain were discontinued after the demolition of the "coal pocket" in 1969. The cordwood department was dropped to make room for a full line of spruce framing lumber and other wood based building materials.

April 28, 1973 was L.P. Adams Co., Inc.'s grand opening of new offices, showrooms and warehouse with a week long open house to show off the 7,000 square foot, two-story endeavor. In the late 1970's, Harry retired, putting Wayne in charge of L.P. Adams Co., Inc. In 1984, Wayne added an 18,000 square foot warehouse to store the expanding inventory necessary to serve the community.

Meanwhile, Wayne's brother Lee concentrated on the fuel oil business and building the hardware and gardening department. He later opened the Hinsdale Hardware Store; a division of L.P. Adams Co., Inc. Lee left the company in 1989 going on to other ventures.

The oil business was eliminated in 1999 when the storage tanks were removed and the oil tank delivery truck was sold. This made room to further expand the lumber yard for more parking and loading areas. In the mid 1990's, L.P. Adams Co., Inc. stepped back in to the home heating ring with a new product called Heartland Wood Pellets. Approaching two decades later, L.P. Adams Co., Inc. has grown the pellet business to service hundreds of customers.

In 2006, L.P. Adams Co., Inc. again under the leadership of Wayne added another 10,000 square foot addition to enclose the ever growing inventory. During this project, L.P. Adams Co., Inc. also had the rear foundation wall installed for a future warehouse which will fully enclose the lumber yard. In that same year, the Hinsdale Hardware Store was consolidated into the Dalton location.

In November 2012, under the leadership of Wayne Walton and his sons, the final phase of L.P. Adams Co., Inc. warehouse expansion was under way. Over the next several months, the 17,000 square foot building took shape and was completed in late May of 2013. With the building enclosed, the L.P. Adams team assembled the steel racks, locating them precisely throughout the building. The racks were loaded with all the lumber and building materials which were formally stored outdoors in the ‘lumber yard’. Once the ‘lumber yard’ was emptied, the last storage shed was torn down to make way for the ‘yard’ to graded and leveled. As the summer of 2013 ended, the newest addition to our expansion was complete and fully operational. L.P. Adams Co., Inc. now has a combined indoor storage capacity of nearly 52,000 square feet, with the completion of this new addition.  L.P. Adams Co., Inc. has now virtually enclosed our entire inventory, enabling the L.P. Adams Co., Inc. team to protect our materials, thus providing a better product to our valued customers. Please come visit the newest addition to our warehouse in our Dalton, MA location and experience the difference of our facility and our customer oriented staff.

With this final phase of our expansion complete and another chapter in our history written, you can rest assured, L.P. Adams Co., Inc. will continue to grow and evolve with our industry and our community. Stay tuned for the next exciting chapter to begin.